Note:  See important update at the bottom of this article.

In 2016, the FDA approved nuplazid as the first therapeutic specifically to treat severe psychiatric symptoms that can occur in Parkinson’s Disease, specifically hallucinations and delusions.  This is a big deal, because most existing anti-psychotics, such as those commonly used to treat schizophrenia, work by blocking dopamine signaling.  This is, of course, exactly the opposite of what Parkinson’s patients need.  In fact, some of these drugs can actually cause ‘drug-induced parkinsonism‘.  The inappropriateness of these drugs for Parkinson’s patients has been well known for many years, but they continued to be prescribed to many patients, resulting in significant patient harm, including a substantially increased risk of death.

The key innovation with nuplazid is that it exerts its anti-psychotic actions without interfering with dopamine signaling (it instead targets serotonin signaling, which is also targeted by many common anti-depressants).  As such, no worsening of Parkinson’s disease symptoms was observed in the clinical trials, in contrast to other anti-psychotics.  The best summaries I could find of data supporting efficacy of the drug are from the FDA summary packet.  This first one shows improvement on the measure of Parkinson’s Disease psychosis used in the study.  As with many studies of psychiatric conditions, there is a large placebo effect, i.e., improvement seen on average in patients not given the drug, but the impact of the drug is clearly statistically significant at 6 weeks. 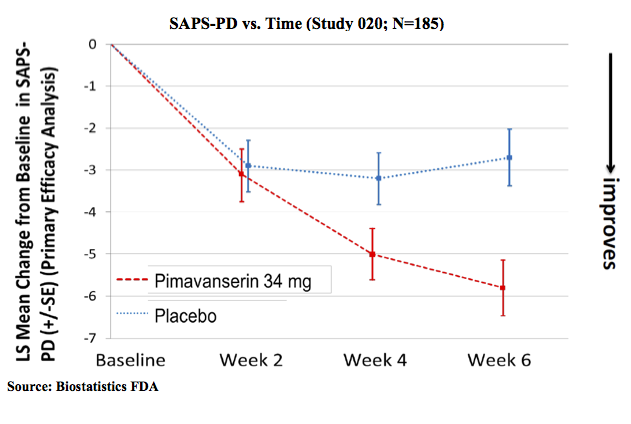 This second graph is a little more complicated to interpret but is nicely annotated with key conclusions. 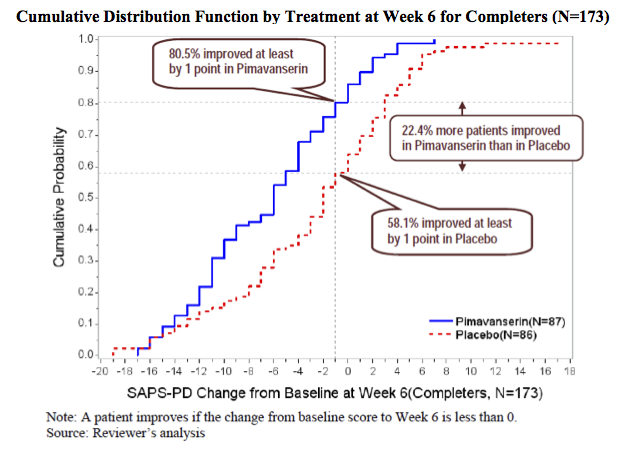 The FDA approval was not without controversy (e.g., this commentary, which I don’t completely agree with).  The criticisms centered primarily on the relatively short duration of the clinical trial, the relatively modest effect vs. placebo, and the fact that two previous clinical trials had failed to achieve their primary endpoints (in my view, the earlier trials had methodological flaws).  A number of commentaries focused on the so-called “Black Box” warning that the FDA required, but this warning is the same as those applied to all other anti-psychotics, i.e., it is based on the drug class and not the specific drug.

My view:  [Note that I wrote this shortly after the drug was approved; I have not edited it based on the initial patient reports discussed below.]  This is the rare example of a truly novel drug, in terms of the way it works.  That’s the good news — there clearly needed to be a new option, especially for PD.  But it’s also the bad news; it will probably take years of the drug being on the market before its true cost/benefit is clearly understood.  At this time, I think it’s fair to conclude at this point that nuplazid is the best therapeutic option for Parkinson’s patients for whom symptoms of pyschosis are debilitating.  That doesn’t mean that it’s risk-free, but I think the FDA’s conclusion that the benefits outweigh the risks is very reasonable based on the data.

Update (April 2018):  CNN published an alarming report suggesting both that many patients fail to benefit from the drug, and that a number of deaths may be attributable to the drug’s use.  The CNN report was based, in part, on a post-approval analysis published by the Institute for Safe Medication Practices which, in turn was based largely on the FDA’s adverse events database (accessible here).  Indeed, there are hundreds of deaths reported.  The ISMP also noted, however, the complexity of analyzing these results:

The first substantial group of pimavanserin adverse event reports disclosed an additional safety issue: We identified 318 cases where pimavanserin, which blocks serotonin signaling, was combined with quetiapine (SEROQUEL) or other antipsychotics that block dopamine signaling. These drugs are not recommended for use in the elderly, and are not approved for use in Parkinson’s. Also in this subset of patients, each was taking a median of 10 different drugs.

Finally, it is important to keep in mind that the FDA’s data comes from patients and doctors reporting the adverse events, so unlike a clinical trial, it is impossible to obtain rigorous statistics; in a response linked to the CNN article, Acadia, the company marketing Nuplazid, presents an analysis based on the Medicare Claims Database and other data suggesting that Nuplazid actually lowers mortality compared to untreated patients with Parkinson’s Disease psychosis.  Additional clinical trials are on-going and may help to clarify the serious concerns about this new drug.

In the absence of new guidance from the FDA, patients and their doctors will need to evaluate the risk/benefit tradeoff given the incomplete information available and given the patient’s specific circumstances.  Concerns about nuplazid should not, however, be used to justify treating Parkinson’s patients with typical antipsychotic drugs that are specifically contraindicated for Parkinson’s.