As introduced here, one useful therapeutic strategy for increasing dopamine is to slow down its degradation.  Every biological molecules that is made in your body also has a mechanism for its destruction (or, in many cases, recycling).  There are good reasons for this, e.g., you may not need as much of the molecule at some point.  But Parkinson’s patients need as much dopamine in their brains as they can get, so slowing down its destruction is a good therapeutic strategy.

It’s a slightly unusual drug in that it binds to the enzymes irreversibly.  Most drugs bind to their targets potently but reversibly, i.e., they can stick to the target, stay there for a fairly long time, but eventually come off at some point.  Generally that is considered preferable in drug discovery.  Sticking to the target and never coming off (irreversible inhibition) sounds great, but such a drug will also irreversibly bind to other unintended, off-target proteins, which can cause toxicity.  Your immune system could also get confused and think a chemically modified protein is foreign, initiating an autoimmune response, which can be a fairly serious adverse event.  But there are a number of other drugs like selegiline that are irreversible but safe and effective, such as penicillin; even aspirin irreversibly modifies its target protein.  One advantage of irreversible binding is that you don’t need to take the drug frequently (unlike levodopa!); once-a-day is plenty.

There are two major issues with selegiline that motivated the search for newer drugs, i.e., rasagiline (Azilect), that have largely displaced selegiline in therapeutic use.  The first is that, in theory at least, you could get high taking it (not in a good way).  Selegiline itself doesn’t have significant psychoactive effects, but when it is metabolized (chemically modified by enzymes in the body), it turns into, basically, methamphetamines.  As in “crystal meth”, Breaking Bad, etc. 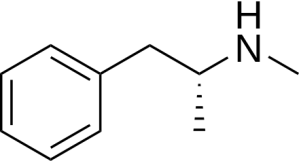 L-methamphetamine, a metabolite (breakdown product) of selegiline. Also a component of “crystal meth”.

It’s important to keep this in perspective; the same compound is used in over-the-counter nasal decongestants, for example, so it can, in principle, be used safely.

A second major issue with selegiline is that it can inhibit both MAO-A and MAO-B, although MAO-B is preferred.  Since both MAO-A and MAO-B are involved in degrading dopamine, that would seem like a good thing.  But MAO-A also degrades a number of other important molecules including tyramine, a close chemical relative of dopamine.

Too much tyramine can cause blood pressure to increase dangerously.  This is rare, but can theoretically occur when people eat a lot of fermented foods, including certain types of cheese, which contain high levels of tyramine, while also taking a MAO-A inhibitor, thus slowing down the degradation of tyramine.  At the doses prescribed to Parkinson’s patients, this didn’t seem to be a major issue in practice, but still a concern.

These concerns about selegiline led to the search for new, more selective selective MAO-B inhibitors lacking amphetamine metabolites.  The winner was rasagiline, marketed as Azilect.

I won’t discuss the clinical trials leading to FDA approval in detail because the conclusions were mostly straightforward.  In relatively ‘early’ Parkinson’s patients, rasagiline can be used to reduce symptoms, not to the same extent as levodopa, but with convenient once-a-day dosing.  In more advanced patients, taking rasagiline in addition to levodopa can reduce motor fluctuations (on/off cycling).  Safety appears to be excellent overall.  While tyramine interactions remain a theoretical concern, no dietary restrictions are generally imposed for using rasagiline, including in the clinical trials.

One of the clinical trials was designed to test whether rasagiline slows down progression of Parkinson’s disease.  The bottom line is no (according to the FDA, who have the final word on such issues), but the clinical trial design was interesting and the results came heart-breakingly close to demonstrating a disease-modifying effect, which I discuss separately here.