Short answer:  The best available scientific evidence suggests that a few chemicals, including some pesticides, increase risk of Parkinson’s disease, but only a small fraction of cases are believed to be caused by any sort of environmental exposure.

Longer answer:  The first chemical demonstrated to cause Parkinson’s disease is MPTP, as discussed here and in the fascinating book, The Case of the Frozen Addicts.  MPTP, or more precisely its metabolite MPP+, is an exceptionally potent toxin that selectively kills dopaminergic neurons by poisoning their mitochondria.  This is not a case of slightly increased risk; it quickly and irreversibly causes symptoms essentially indistinguishable from idiopathic Parkinson’s disease.

It is highly unlikely that you will come in contact with these molecules at the present time.  Rather alarmingly, however, in the 1970s, MPP+ was apparently developed, and field tested, as a herbicide under the name Cyperquat, by Gulf Oil Chemicals Company [see 1, 2, 3]. 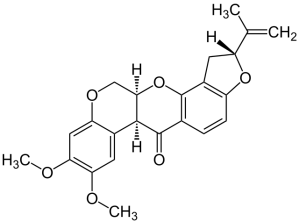 It works by poisoning mitochondria, in a manner very similar to that of MPP+, raising the obvious concern that it could do the same thing in humans (subsequent work also suggests a 2nd possible mechanism of toxicity).   The main reason it doesn’t, at least with moderate, short-term exposure, is apparently because it is not well-absorbed through the guts or skin of mammals.  It is, however, routinely used in laboratory experiments to create symptoms very similar to Parkinson’s disease in mice.  Originally this was done by direct injection into the brain, but subsequent research has shown that the same symptoms can be induced by chronic oral administration of rotenone.  Finally, epidemiological evidence suggests that chronic exposure to rotenone (primarily among farm workers) significantly increases the risk of developing Parkinson’s disease.  No one of these studies definitively proves that rotenone causes Parkinson’s, but together they raise significant concerns.

Another pesticide worth highlighting is paraquat, due to its chemical similarity to MPP+.  [This commentary, from a toxicologist, raises some legitimate objections to the preceding sentence, and also reviews some of the conflicting data on paraquat.  I note, however, that (1) the scientific evidence has strengthened since 2007, and (2) as a PhD physical chemist and someone involved in drug discovery, I don’t think the chemical similarity can be completely dismissed as irrelevant.]

Like rotenone, laboratory experiments and epidemiology suggest that concern is warranted, although interestingly, the mechanism of toxicity appears to be distinct.  Paraquat has apparently not been approved for use in Europe since 2007, but continues to be used in the United States and many other countries.

It is important to note that standards of proof, with respect to human safety, are different for drugs, regulated by the FDA, and pesticides, regulated by the EPA.  In fairness, it is extraordinarily difficult to assess the effects of very long-term exposure on human health (potentially decades of exposure, in the case of Parkinson’s and other neurodegenerative diseases); out of necessity, toxicity testing generally focuses on high doses over relatively short times (weeks or months).

Finally, among illegal drugs, there is reason for concern that the highly addictive drug methamphetamine may contribute to early development of Parkinson’s disease.  There is no question that “meth” is toxic to neurons, including dopamine-producing neurons, and this can lead to symptoms similar to those of Parkinson’s.  For a recent review of evidence, see “Methamphetamine use and future risk for Parkinson’s disease: Evidence and clinical implications“.